Don’t Underestimate the Seriousness of a Misdemeanor Conviction in Virginia 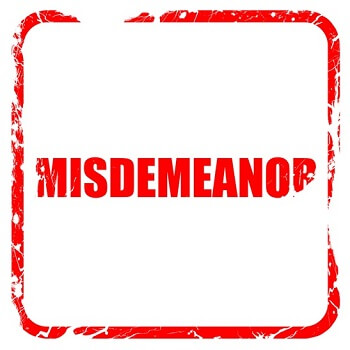 Many people think of misdemeanors as minor offenses and may not be worried when they are charged with one. However, some misdemeanor convictions do result in jail time and significant fines and can have consequences in your personal and professional life. If you are charged with a misdemeanor, you need a skilled defense attorney just as you would if you were charged with a felony. It’s important to understand the classes of a misdemeanor and why you should take these charges seriously.

How Misdemeanors Are Classified in Virginia

The Commonwealth of Virginia categorizes criminal offenses as either felonies or misdemeanors according to their potential sentences. Any offense that is punishable by death or confinement in a state prison is considered a felony. All other offenses fall into one of four classes of a misdemeanor. Class 1 misdemeanors carry the harshest punishments and Class 4 charges are considered the least serious. Here is a brief look at these classes:

It’s important to remember that even if you are only charged with a Class 4 misdemeanor and get off with a $250 fine, you will have a criminal conviction on your record, which can have long-lasting consequences.

In Virginia, misdemeanor charges are heard by a judge in General District Court (GDC). The prosecutor’s office will present evidence of your crime and may call witnesses to the stand. You will have the opportunity to defend yourself with evidence. While this trial is similar to what you may have seen on TV, there is no jury, no long opening statements, and the judge usually renders a verdict immediately after both sides have presented their cases. The proceeding is usually fast-paced, and it is easy for the accused to feel overwhelmed.

When facing a misdemeanor, you will likely be approached by the prosecutor before trial to plead guilty in exchange for a reduced charge or for a more favorable sentence. This saves the court time and money, but it may not be the best option for you. You should not agree to a deal without consulting an attorney. In fact, you should call a criminal defense attorney as soon as you can after your arrest.

Why You Need a Criminal Defense Lawyer for a Misdemeanor

Too often, people charged with misdemeanors think they can handle their own cases. While it does cost money to hire a defense attorney, the results are often well worth it. Even if you are guilty, an attorney may be able to get the charges reduced or even dismissed if your constitutional rights were violated. If you are not guilty, an attorney can present evidence and witnesses to convince the judge of your innocence. A guilty verdict could mean months in jail and hundreds of dollars in fines, as well as a criminal conviction on your record that could affect your ability to get a job or a loan.

If you are charged with a misdemeanor in Midlothian, Richmond, or anywhere in Virginia, don’t risk your future. Call Quest Law PLLC at 804-396-3329 for a free consultation to talk to an experienced criminal defense attorney today.